On arrival at Srinagar Airport by flight meet our assistance, who will transfer you to the Houseboat. Check-into the Houseboat. After fresh up, meet our driver and visit to the visit famous Mughal Garden and its Bagh like Nishat Bagh built by Nur Jahan’s Brother, Asaf Khan in 1633 A.D. Cheshma Shahi – built by Shah Jahan in 1632 A.D. and Shalimar Bagh built by Jahangir for his wife Empress Nur Jahan. All these gardens are situated near the bank of Dal Lake near the Zabarvan Hills in the back ground. Later visit to world famous carpet weaving factory known for its export handicraft products. In the Evening, Shikara ride will be provided for one hour to visit Meena Market Dal Lake and Floating market. Drive back to the Houseboat. Dinner will be served at hotel.

Srinagar is the largest city and the summer capital of Jammu and Kashmir, India. It lies in the Kashmir Valley on the banks of the Jhelum River, a tributary of the Indus, and Dal and Anchar lakes. The city is known for its natural environment, gardens, waterfronts and houseboats. It is also known for traditional Kashmiri handicrafts like Kashmir shawls and also dried fruits. It is the northernmost city of India to have over one million people, the 32nd most populous city in the country, and the second largest city located in the Himalayas, after Kathmandu.

After breakfast at your houseboat, Check out from the Houseboat. Meet our driver and you will be driven for Sonamarg situated at an altitude of 3,000 meters above sea level. En-route Kheer Bhavani Temple then visit Sonamarg sheer scenic splendor, situated on the way to Ladakh It offers spectacular mountain ranges with varied geological features. Some of these mountains which rise to a height of about 5,300 meters from sea are lavishly green and some are barren and rocky. Evening back to the Srinagar. Check into the hotel. Dinner will be served at hotel. Overnight stay at your Srinagar Hotel.

After morning breakfast at your Hotel, Meet our driver and drive to Yusmarg. This place is located at a distance of 50 KM from Srinagar. The road passes through different villages and apple gardens and it will take two hours to reach Yusmarg from Srinagar.  Yusmarg in Kashmiri means The Meadow of Jesus. It is said to have been visited by Jesus. It is an alpine valley covered with snow clad mountains and the meadows of Pine and Fir. It lies 13 km (8.1 mi) south of Charari Sharief, a town in Budgam district of Jammu and Kashmir. It is situated at the bank of Doodganga River which is a tributary of Jhelum River.

It is located in the Pir Panjal peaks, a sub range of Himalaya. The Peaks are: The Sunset Peak and the Tatakooti Peak for which the expeditions lead from this hill station. It lies at an altitude of 2,396 m (7,861 ft) above sea level. Evening drive back to the Srinagar hotel. Dinner will be served at hotel. Overnight stay at Srinagar Hotel.

After morning breakfast at your Hotel, check out your Hotel. Meet our driver and Drive to Pahalgum (valley of shepherds). Will be cover in 3hrs. En-route visit saffron field of pampore and enjoy the beautiful countryside drive through the pine forest the total distance of 96kms. On the way visit Awanti pura Temple. Check into the Hotel. Rest of day at Leisure. Dinner will be served at hotel. Overnight stay in Pahalgam Hotel.

PAHALGAM: Pahalgam, the Village of Shepherds! The Lidder River runs through Pahalgam in a rushing gray-green torrent, Foam flecked, and breaking in curling waves against the boulders that lie in its path. Its sound is an eternal as the whisper of wind through pine and fir, its force primeval its untamed splendor.

After morning breakfast at your Hotel, meet our driver and visit Aru & Betaab Valley as well as Chandanwari. Later return to hotel.  Dinner will be served in hotel & overnight stay in Pahalgam Hotel.

The Valley is towards northeast of Pahalgam and falls between Pahalgam and Chandanwari, the valley surrounded by lush green meadows, snow clad mountains and covered with dense vegetation.

After morning breakfast at your Hotel, meet our driver and visit to Achabal is an important tourist place about 8.1 km away from Anantnag. The place is notable for an ancient spring surrounded by a garden terraced and developed by the Mughals. The upper portion of the garden is called ‘Bag-e-Begum Abad’ developed by Malika Noor Jehan Begum in 1616 AD and renowned as Sahib Abad in which there is a Hamam (treasure of water) getting heat from a logical lamp. Achabal was once the pleasure retreat of Empress Noor Jehan. A trout hatchery is also located nearby. Achabal is the site of a Mughal garden called Achabal Gardens.

After Acahabal Sightseeing proceed to Kokernag. Kokernag is a sub- district town and a notified area committee in Breng Valley (The Golden Crown of Kashmir), Anantnag district in the Indian union territory of Jammu and Kashmir. The place is known for its gardens, pristine freshwater springs and rainbow trout farms. It is 25.3 km from Anantnag via NH244. It is one of the most popular weekend getaways from the state capital Srinagar Kokernag is known also as Breng Kokernag, the name given by Sheikh ul Alam, poet and scholar. He said “kokernag breng chu sunsund preng” which means that “Kokernag is Golden crown of Kashmir”. Citation needed] Kokernag is also mentioned in Ain Akbari, where in it has been mentioned that the water of Kokernag satisfies both hunger and thirst and it is also a remedy for indigestion.

After Kokernag sightseeing Visit to Sinthan Top Daksum.  Sinthan Top is a mountain pass, a popular tourist destination located between South Kashmir’s Breng Valley in Anantnag district and Kishtwar district of Chenab Valley in the Indian union territory of Jammu and Kashmir. Majority of the area lies on the Kishtwar side. Sinthan Top is the South-East end of Breng Valley (The Golden Crown of Kashmir) and is 48 km from famous Kokernag spring. Later return to hotel.  Dinner will be served in hotel & overnight stay in Pahalgam Hotel.

After morning breakfast at your Hotel, Check out from Hotel. Meet our driver and drive to Gulmarg, (meadows of flowers) 2730 mts above the sea level. Gulmarg has one of the best ski slopes in the world, and one of the highest golf courses in the world with 18 holes. The view Enroute from Tang Marg to Gulmarg is fascinating. Also Visit to Drung Valley Sightseeing Drung a small village is a beautiful tourist spot in the Tangmarg tehsil of Gulmarg, Baramulla. It is around 56 kilometers away from the capital city of Kashmir, Srinagar. Quite often people who visit Kashmir because of huge social media appeal only visit places like Gulmarg, Pahalgam which makes them miss out on this quite little place which is nestled just around 10 kilometers away from Tangmarg. Later drive to Hotel. Check in at hotel. Rest of the day free. Dinner will be served in hotel & overnight at Hotel Gulmarg.

GULMARG: Gulmarg legendary beauty, its prime location and its proximity to Srinagar naturally make it one of the premier hill resorts in country. Originally named Gaurimargmouth. A moat indicates the dividing it was renamed Gulmarg in the 16th century by Sultan Yusuf Shah, who was inspired by the sight of its grassy slopes emblazoned with wildflowers. Gulmarg was a favorite haunt of Emperor Jahangir who once collected 21 different varieties of flowers. Today Gulmarg is not merely a mountain resort of exceptional beauty it also has the highest green golf course in the world, at an attitude of 2680 meters above sea level, and is the country’s prime ski resort in the winter.

After morning breakfast sightseeing of Gulmarg has one of the best ski slopes in the world, and one of the highest golf courses in the world with 18 holes. You can enjoy a view of Naga Parbat if the weather permits. Enjoy Gondola Ride till phase 1. Later return to hotel. Dinner will be served in hotel & overnight at Hotel Gulmarg.

After breakfast at your Hotel, check out from Hotel and transfer to Srinagar airport to board the Flight to onward destination with sweet memories. 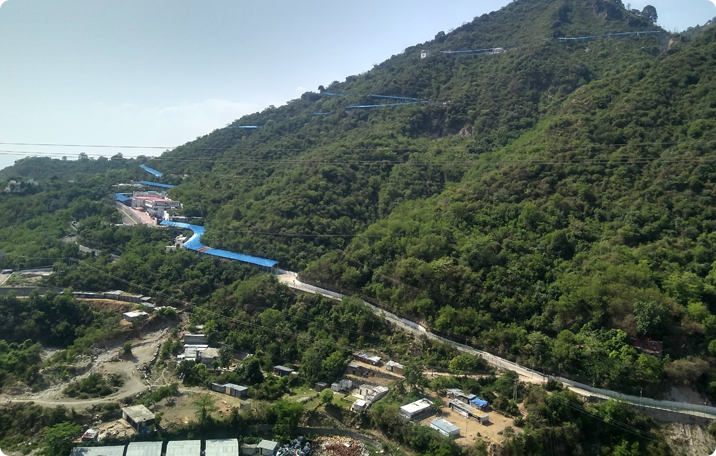 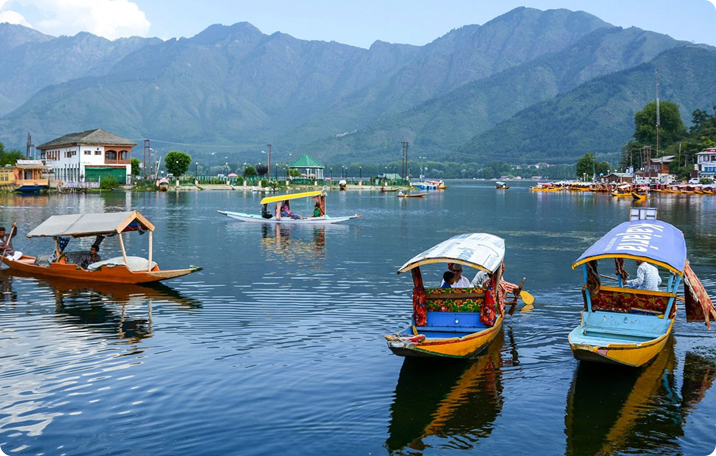 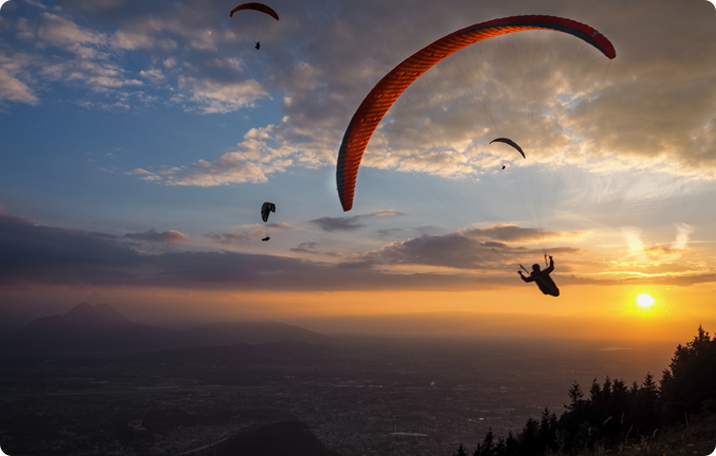